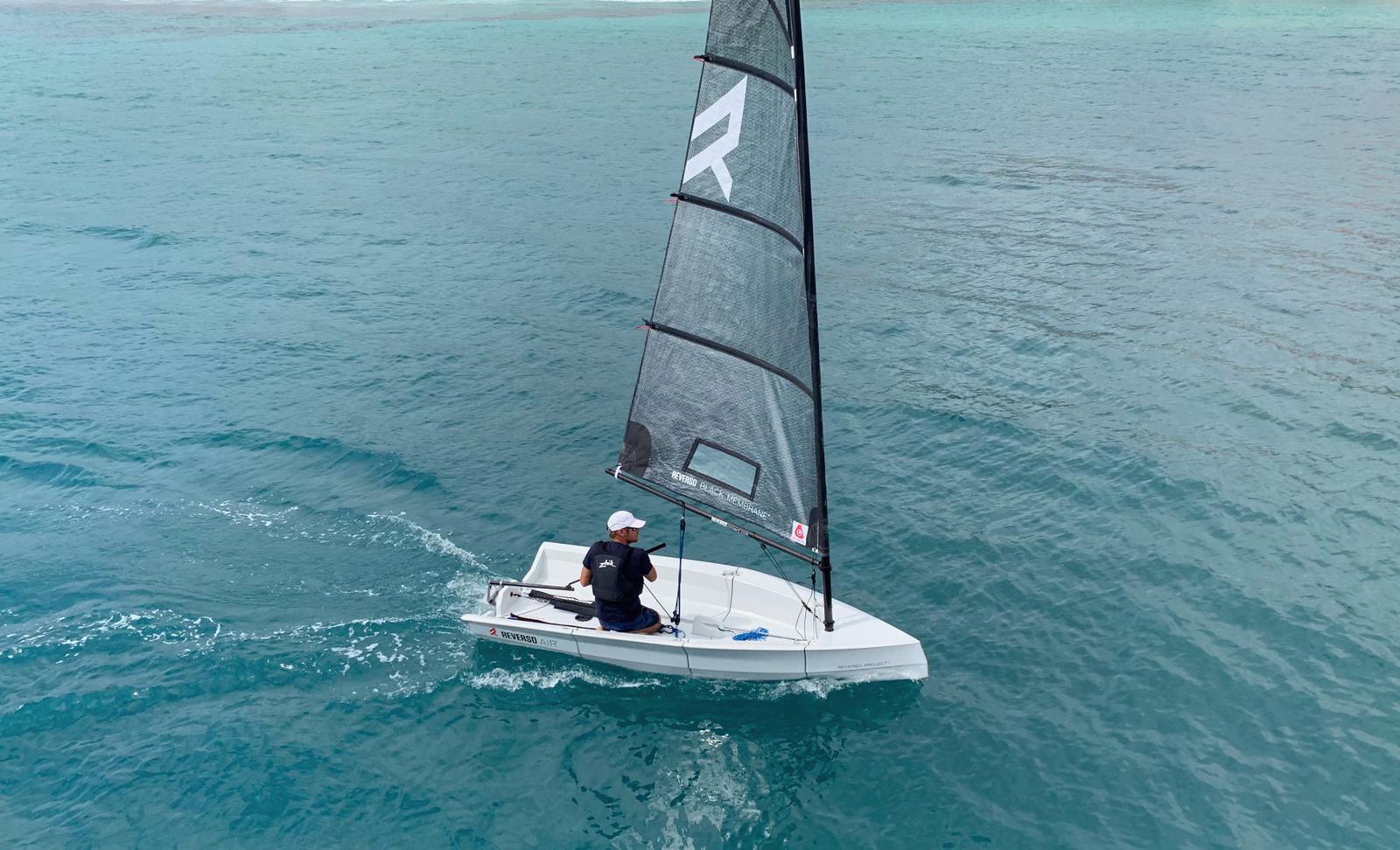 Tacking a small sailboat : what most people ignore

Tips
Key points
Except for the high level, there are few facilities for advanced training in small boat sailing.

Most people, after learning the basics, progress on their own. There are some mistakes that we have often observed. Once corrected, they will greatly simplify your sailing! We will review the 3 steps to a good tack, and the common mistakes.

The 3 steps of the tack

You push the rudder, the rudder angle increases as you maneuver. (There is no need to put on the "brake" from the start with the rudder.)
Lower the head to change side and look ahead to visualize when to put back the tiller straight (when the sail re-inflates).
At this moment, we have not yet changed hands, and we steer for a few moments with the same hand that held the bar previously

Tip: Keeping the boat flat or slightly heeled makes the maneuver easier. This is to be tested, by slightly easing the sheet and is a dynamic action, it is to be done just when pushing the bar, not before. 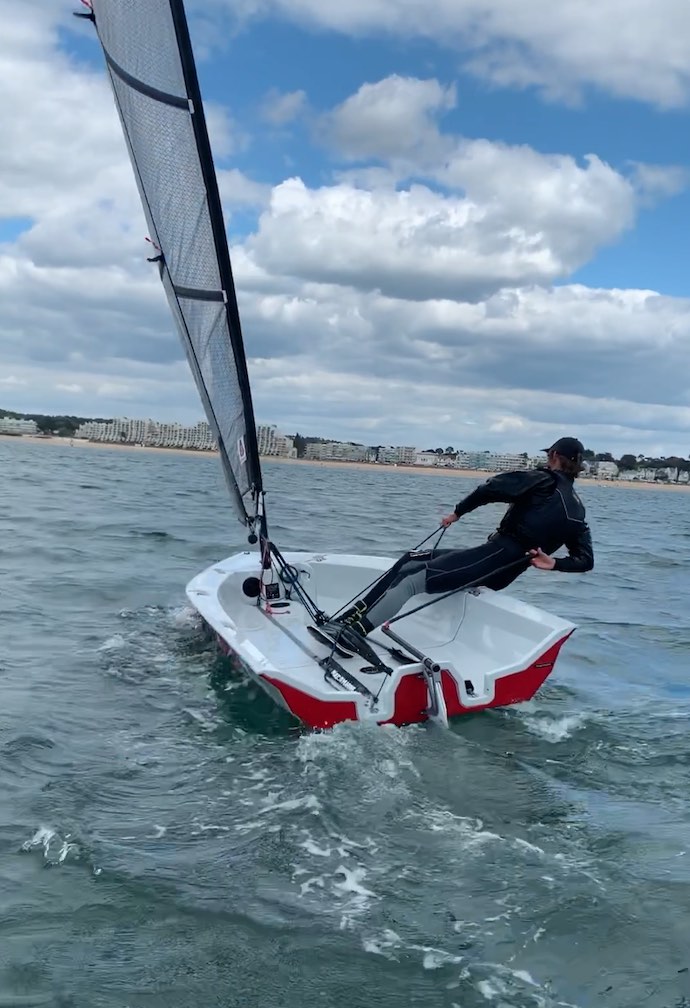 Clément on his Reverso Air Karma red.
He has just finished Step 2 and has not yet changed his hands (Step 3). Look closely: his right hand is crossing behind his back. (It is much easier than it looks). This way, he ensures the trajectory and perfectly decomposes the movement.

Error N°1 : Trying to swap hands during the maneuver

This very common mistake often leads to a missed turn or an unsafe path out of a turn. For a simple reason: because it is very difficult. From the Optimist, to the 49er, to the Reverso, you have to pass the helm on your back. 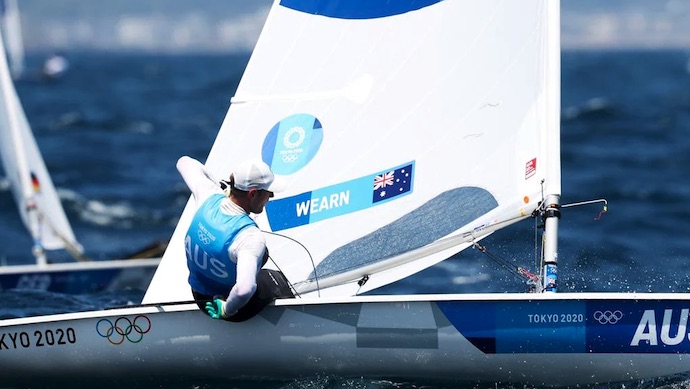 Matt Wearn (Aus), gold medalist at the Tokyo games in the ILCA 7 dinghy, also breaks down his tack and passes the helm once the boat is back on its new trajectory. So, are you convinced?

This mistake is a consequence of the previous one. People who tack by looking behind them do so because they want to see where the tiller is so they can catch it during the maneuver.
‍
Good news: by breaking down, you won't change hands at this inopportune moment and you'll be able to watch where you're going, which is much more efficient and safer if you're sailing from a beach where there may be swimmers or if you want to participate in a regatta.

Error N°3 : Triggering a tack when you are not upwind

The tacking maneuver will generate a loss of speed. If you start a tack on the reach or on the downwind side, the rudder will generate drag, your boat will slow down and will not have enough speed to cross the wind axis. -> Step 1 : Preparing the tack

Mistake #3: not moving the crew backwards

The position of the crew is very important. A crew member who is too far forward has a great chance of compromising the smooth running of the maneuver. If there are two of you, ask the crew member to move back during the tack.

This tack is more adapted to light winds. It consists in applying windward heel to the boat as you push the helm and staying on this windward side until the sail passes. More technical but very nice to set as a goal when progressing.

This maneuver is very impressive and takes advantage of the shape of the Reverso Air's hull that this crew manages to skid in the turn. This maneuver is performed at maximum speed, with the daggerboard slightly raised and it is important to control the boat's trim with the sheet so that it is not heeled but flat and even slightly windward heeled to be able to snap. Also note: the rudder angle which increases progressively so as not to break the speed of entry into the turn.

A glimpse of the Reverso Air's hull, which is designed to generate stability and the ability to surf and snap. See the surf influence in our design section.

The wind is getting stronger: think about tacking, even downwind (instead of gybing)

It is not inconsistent to choose a tack rather than a gybe, even downwind, if you are sailing in strong winds. Indeed, for the same level of sailor, tacking will be less technical in a strong wind. Think about it, and contrary to popular belief, tacking will not make you "go upwind". You will just have to  sail downinf again after tacking.

It is very simple to install a small waterproof camera like a gopro on the front of the Reverso. You will be able to compare the correct breakdown of the 3 steps and identify the moments that lack fluidity.